Hey Everyone! Finally back and writing again after a busy (and stressful!) first term back at university. This week I have decided to write about the awful experience and high amount of sexual harassment that still goes on in our society today.

Featured Image ‘Silence of the Lambs’: By Adam Zyglis from The Buffalo News

Last week a huge news story broke surrounding sexual harassment inflicted by the 1% and the bodies of a lot of big companies. I am sure you would have heard of the presidents club scandal by now, and it is not only upsetting that this still happens in 2018, but also this event has gone ahead for the past 33 years before it has been exposed.

The presidents club is a men-only, black tie annual event at the London Dorchester Hotel, used to raise a lot of money for charity. The Financial Times described the guestlist as head figures within ‘British business, politics and finance’. The reason for the event is kind, helpful and extremely beneficial for charities, in fact for some the money from this event is life or death for the public. However, despite the reason for the event, there is a vile and seedy undertone, so bad that we overlook the good that this event can do for charities.

A couple of journalists with the Financial Times, went undercover as a hostess in order to find out what really goes on in this exclusive, men-only event, and what she experienced throughout the night was truly disturbing. The event included financiers, an undersecretary of state, hedge fund founders and even dragons den stars. The auction alone says a lot about the vile tone of this event including plastic surgery suggested for a wife and exclusive strip club hires.

Then we have the suspicious behavior leading up to the event. The hostesses were informed that their phones would be locked away, they were not allowed to bring their partners and some were told to lie to their partners regarding the nature of the event. The first thing that strikes me as vile and wrong is that they were told to wear black sexy dresses and matching sexy underwear. Why require sexy underwear for an all men charity event if it was all above board?  Additionally, they were made to sign a 5 page NDA (GAG CLAUSE!) regarding the event that they couldn’t read properly and couldn’t take their own copy.

The actual event details are wrong and vile. The men started off small in their harassment with hand holding and crude comments. But after the groping of ass, leg, and hips, some men offered the hostesses money for sex, nanny jobs, whipping out their manhood and requesting women to get onto the table and ‘rip off their knickers’. The leaders and lords purposefully got the women working drunk, some were dazed and almost unresponsive.

The night has been exposed and canceled and the public has been ‘shocked’ that a gala like this has not only managed to survive 33 years but also how it has taken until 2018 for them to be caught out. I must admit I was shocked it has taken until now, but the actual assault and harassment from the 1% really do not surprise me in the slightest. 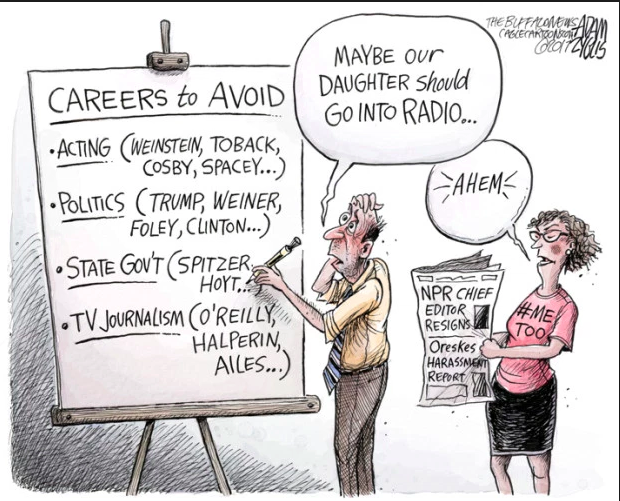 The facts above from the national charity Rape Crisis are shocking and disgraceful. Putting it further into perspective, roughly 2 people are raped every 10 minutes in England and Wales. When you look at in experiences roughly:

The sad truth is that in a woman’s lifetime, she will almost definitely be assaulted or sexually harassed at some point.

What qualifies as sexual harassment?

The Oxford Dictionary definition of sexual harassment is:

“Behaviour characterized by the making of unwelcome and inappropriate sexual remarks or physical advances in a workplace or other professional or social situation.”

Why do we accept it?

I thought about this quite a bit. Why do we allow and accept people to treat us this way? There have been many times while living in London that I have felt uncomfortable and threatened. Thankfully never in university or a workplace, but on the flip side when it is in a club or a street, you’re less safe and more at risk of assault or rape.

Countless times in a club has a stranger grabbed my ass and sporadically men attempt to grope my chest. I have been followed, shouted at and some men go as far as to grab me by the arm or stand in my path in an attempt to make me see them. Why do I just pull away and try to ignore it? Why do we laugh awkwardly and shrug off these unwanted attempts from men who are sometimes old enough to be our father?

Because as much as society has started to reveal and notice instances such as the presidents club, and there are amazing movements such as ‘#MeToo’, the law and the government aren’t always on our side. We live in a society where a sexual predator and man that uses the phrase ‘grab her by the pussy’ can become president. Where singers like Chris Brown can beat his partner and still have a career. John Lennon is seen as a legend, advocate for peace and looked up to by many, yet he was known for being physically and emotionally abusive to both his partner’s and children.

Harvey Weinstein’s discretions were low-key known about and paid off with hush money in Hollywood for years. We live in a time where our figureheads are the monsters and the shadow in the alleyway. Furthermore, not everyone sides with the victim. There’s always a reason the victim was targeted.

What were they wearing?

They must have been asking for it!

Were they alone at night?

Did they say no out loud?

Should have fought harder!

It is not the victims’ fault, yet the victims are made to feel as though if they had acted differently it wouldn’t have happened. And this is why I am a feminist.

Below are some websites and helplines for anybody who may be suffering after an attack. Make your voice heard, and fight for a better future.

The Rape and Abuse Line (RAL)